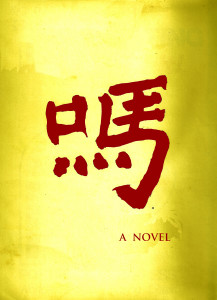 Chinese Puzzle is the first book in the No Sin Mystery Series.  It begins in Shanghai during the sultry summer of 1928.  Extensively researched, the novel introduces main characters No Sin, Zephyr Davies, and Monica Marshall, who barely survive this first encounter with each other.  It’s not just pirate attacks, Machiavellian plots, beatings, and attempted murders that threaten their mortality, but the fact that these three people just don’t get along.

“Chinese Puzzle has received a five star rating from Red City Review.  To read what they have to say click on their name under bookmarks. 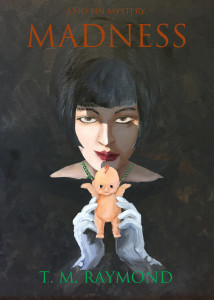 The second book in the series ties up some of the loose ends from Chinese Puzzle.  It’s primarily set in San Francisco in the autumn of 1928. 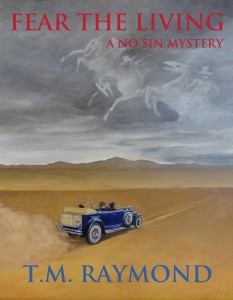 I’ve always thought that the desert was a spooky place.  I’m particularly fascinated by faint, dirt roads that seem to lead right off the face of the earth. I always imagine that if I were to take such a road I’d end up in some weird, desolate universe and would never be able to return to the world that I know.  Fear The Living, is my attempt to give a glimpse of that world, but only a glimpse because there are several other worlds that I desire to explore in this book.  One of these worlds is the United States itself at the very beginning of the great depression.  This was a time of extremes, not just of extreme wealth and extreme poverty, but extreme men with outlandish ideas.  This period brought us Einstein and Hitler, Will Rogers and Father Coughlin, Picasso, Gershwin, Mae West and Charles Lindberg.  Everything was bigger than life and I’ve tried to capture the spirit of that time with a bigger than life mystery set in motion by an extraordinarily ambitious and crazed villain.   The precise form that this mystery takes is laid out concisely in the first chapter of the book, which can be found under “Sample Chapters,” for those who are interested in learning more.

Fear The Living is the third book in the series and is now available from Smashwords, and from Amazon as an ebook.  A print edition is also available from Amazon – links are to the left under “bookmarks.”  (I have no idea why – I’ve tried to establish a “links” section but it keeps coming back as “bookmarks.”)  The cover was created by Kit Colman.

NO SIN IN THE HOUSE OF DEATH 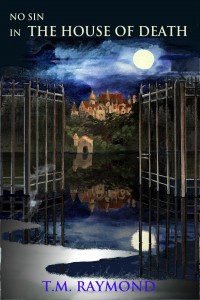 The fourth in a series, No Sin In The House Of Death is a traditional “haunted house” murder mystery – rendered in an untraditional way.  I’ve always loved this old-fashioned kind of story, crammed to the turrets with creaking doors and rotting claws coming out of secret panels, but I hate the silliness, unbelievability, and contrivance that too often mars this time worn genre.  No Sin In The House Of Death is my attempt to create the spooky mansion murder mystery that I always wanted to read.  I’ve deliberately thrown in every hoary cliche possible, then allowed the narrative to play out as realistically as I could imagine.  What would actually happen if a number of intelligent people found themselves trapped in a crumbling mansion on a storm swept island, cut off from the outside world with a deformed maniac on the loose – one who may or may not be human?  How would these people respond to such a threat if they were truly allowed to fend for themselves, unburdened by the machinations of a writer whose  only goal was to create shock and surprise?  I had a lot of fun telling this story with my characters leading the way, and was rewarded with the most classic of ironies – plenty of shocks and surprises that I hadn’t anticipated.